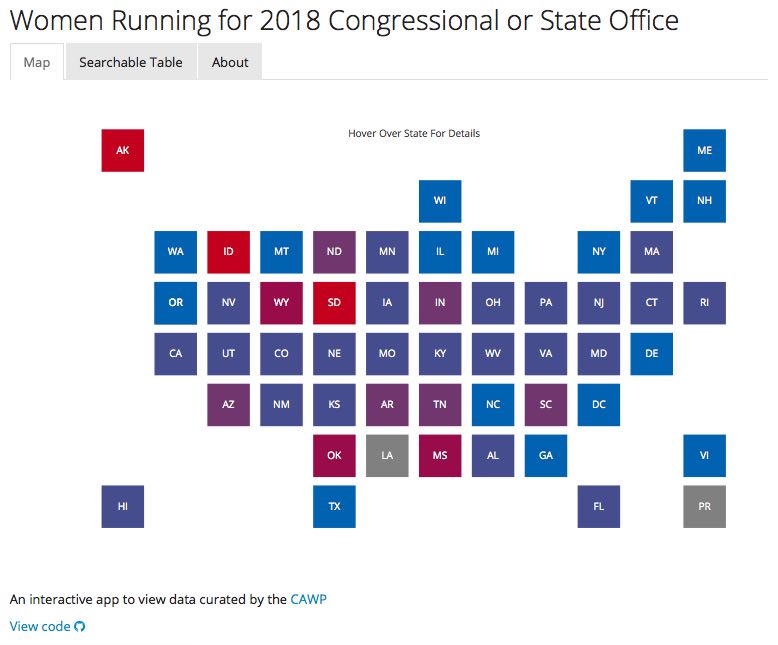 This project was created with data scraped from the website of the Center for American Women in Politics at Rutgers University. The Center conducts research on women’s participation in politics in America and maintains a list of women who are or potentially will be running for US Congress and State offices.

The code scrapes and combines data from their lists of women candidates, cleans and creates new variables, and visualizes the data in an interactive shiny map and searchable data table using plotly and DT packages . The CAWP states that their products or data are available for non-for-profit distribution as long as they are given credit (we are allowed to scrape their data table - thank you CAWP).

See the app in action here. Read a blog about it here. The design of the app was inspired by the adavis app from Gokhan Ciflikli

Combine the special elections and general elections dataframes and then clean things up. First rename one variable that has different names in each of these dataframes.

On the CAWP website database, state abbreviation appears once, one row above all entries for a given state. Spaces below it in that column are blank, until data for the next state appears. Use zoo::na.locf to replace blanks below a state abbreviation with the abbreviation above. In order for this function to work, the blanks first need to be changed to NA.

Remove special characters such as * with filesstrings::trim_anything and remove all blank rows.

Remove candidates who lost their Party’s Primary. This step was added in after Primaries began.

Rename offices from abbreviations to full names. Some are not self-explanatory in their current form (P.S.C). Some offices have more than one name/spelling/punctuation formatting (Comp, Comp., Comtr.) or have been misspelled (Govenor).

These will have to be updated periodically as variants are introduced to the database. Every time the website is re-scraped, check the levels for the variable elections$office to identify additional misspellings or abbreviations that have been introduced and then add them to the next code block.

Candidate name and party affiliation are a single character variable. Separate these into two variables using filestrings::str_elem and base::trimws.

Some candidates in Minnesota have party listed as DFL. According to Wikipedia: Minnesota Democratic–Farmer–Labor Party (DFL) is a social liberal political party in Minnesota affiliated with the Democratic Party. Recode these candidates as Democrats.

Territories that elect US Delegates and states with a small population that have one Federal Representative are listed as having district AL, to mean At-Large. Change district AL to At-Large. State-level offices have blanks for district variable. Change these to State.

Some states or territories have no women running at this time. Combine dataframe with a list of all state names and abbreviations to add missing states as rows with values NA. Remove states with no state abbreviation, since those are territories that won’t show up on the statebins - style map. Capitalize variable names that will be included in the DT tab of the shiny app.

rvest::html_table takes the text from a website’s table, but doesn’t get hyperlinks to elements in the table. I scraped links to candidate websites to add them to the candidate name variable in the dataframe so there could be live hyperlinks in the shiny app datatable, itself. 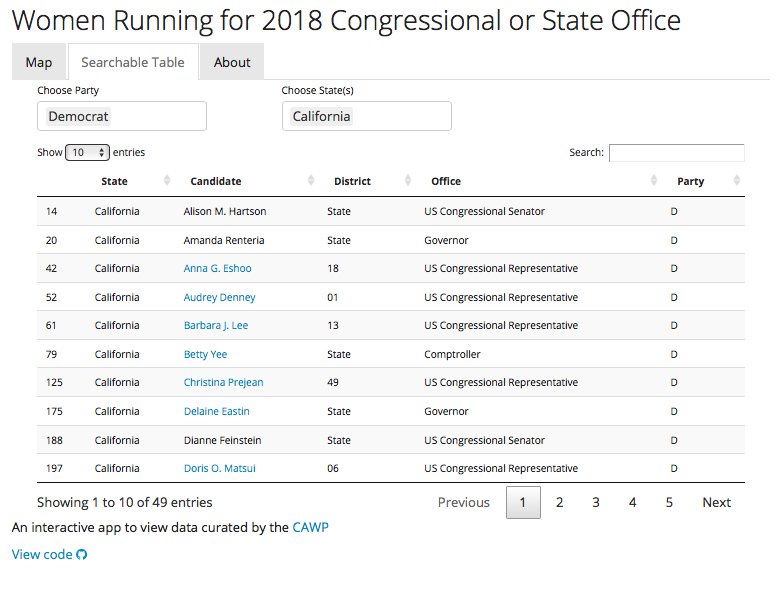 Not all candidates in the CAWP list have a link and not all candidates that have links are from states (if they are from territories). The corresponding names are (re)scraped and these will be used to match the links back to the correct candidate in the elections dataframe. Rows missing state abbreviations will be removed (again).

Make a dataframe for the map: select a subset of needed variables and remove duplicates so there is only one row per state. Rename and recode variables to be readable for the map’s hover text: change abbreviation state and full name State from factor to character variables and change NA values to 0.

To change continuous dempercent variable to categorical for mapping, bin and label it. Currently, statebins is not fully compatible with plotly, resulting in a non-interactive map. To get around that, adapt code from Kenton Russell to combine dataframe with statebins coordinates data statebins:::state_coords and plot it with no lines, tickmarks, axis labels, or grid to make a plotly map with working interactive hover info.

Rearrange column order to create hover text variable that will be made with Map Reduce.

The default statebins coordinates place Alaska in the bottom left of the plot, just above Hawaii. Intuitively, it should be placed in the upper left corner of the plot, northwest of an imaginary Canada. Change Alaska’s row variable to 1 in dataframe to move it.

Make color palette with gray to represent states with no women currently running and 5 colors ranging from the traditional American political party red (Republican) to blue (Democrat) to represent the bins for percent Republican/Democrat among women candidates per state.

The full shiny app code, including code for the DT section of the app, can be found in the app.R and global.R files in this GitHub repo.

Make a plotly - based statebins - style map for use in a shiny app.

The working shiny app can be found here.